My little girl turned one last month, and I firmly believe that the first birthday party is just as much about the parents making it through the first year as it is to celebrate the baby.

Since Charlotte doesn’t necessarily have an opinion on a party theme at this point, I chose “Winter in Paris” for her. We had a small celebration with family and friends- une fête fantastique!

I love to make food for our parties, or should I say, assemble food. I used to make EVERYthing from scratch, and was so wiped out & cranky by the time the party rolled around that well, I wasn’t in the party mood. I have almost perfected the art of assembling appetizers and desserts- I purchase pre-made ingredients, add one or two homemade ones of my own, and put them together.

I also used to design invites and other graphics used for food labels from scratch- eh, overrated. I found these adorable printables from SimoneMadeIt.com: 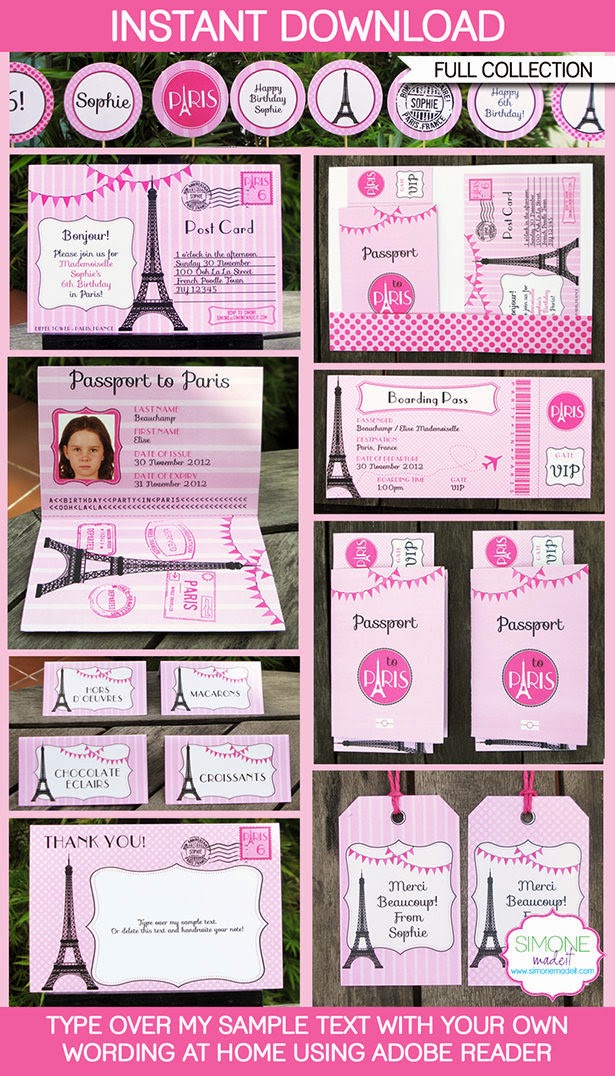 For $12.50, you receive a digital file containing 20 different customizable printables- from invites to food tags to thank you notes!

You might think I am crazy (I know someone in my family mentioned that it might be a little over the top…) but I decided to put Vanilla Cupcake-scented oil on the back of the invites so they would smell yummy. I love little surprises that engage as many senses as possible! I printed out the postcard invite and pasted it to oversize card stock, which I punched a design in all 4 corners, then rolled this delicious scent on the back (available from the Perfumerie section of Little Batch Apothecary- my fave place to buy roll-on scented oils that I use instead of perfume). 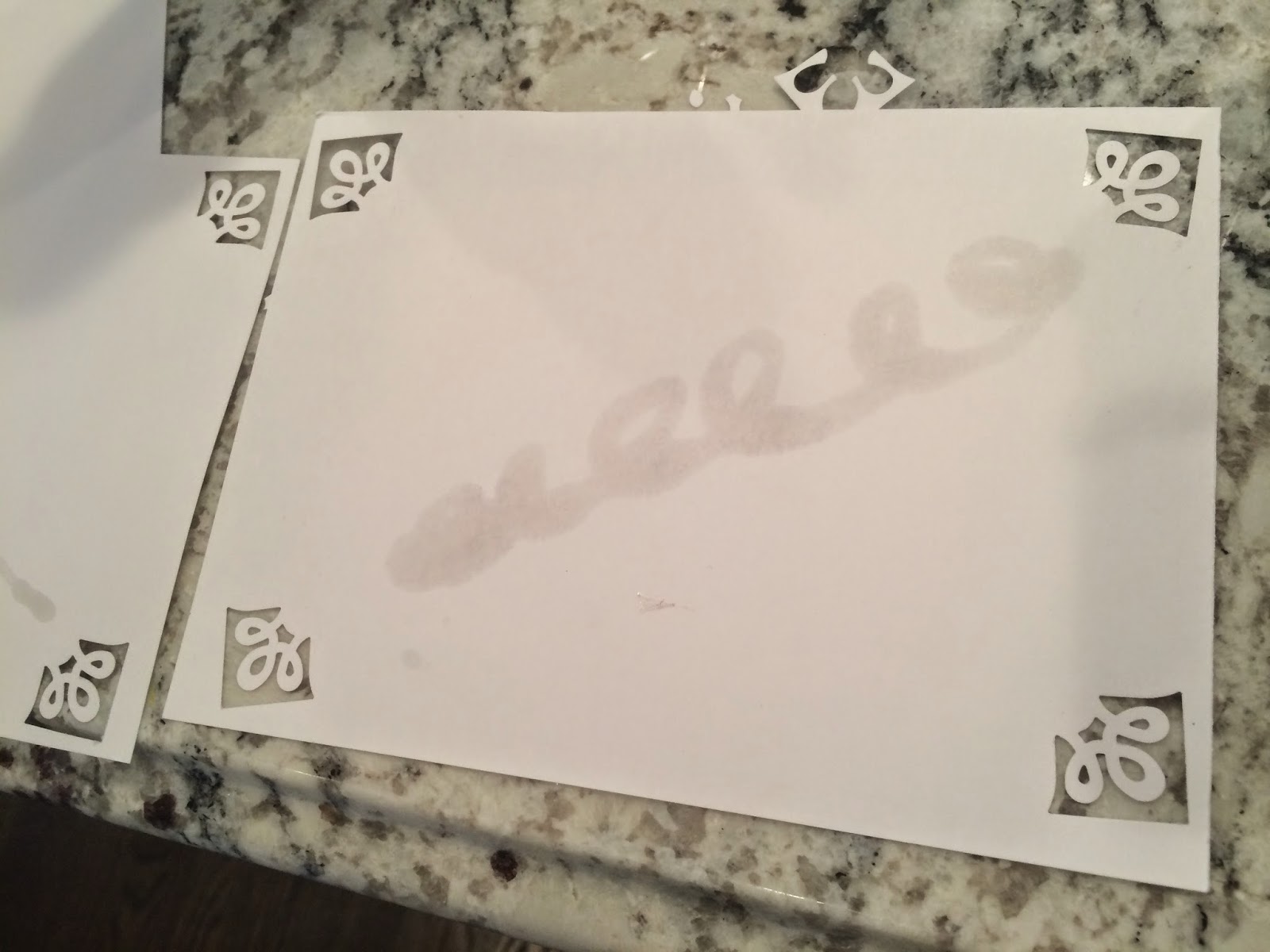 As for the food, here are a few of the things I put together- the signs make them look so much more festive, don’t you think? (and I added something to the big log of cheese below so it wouldn’t look so lonely). 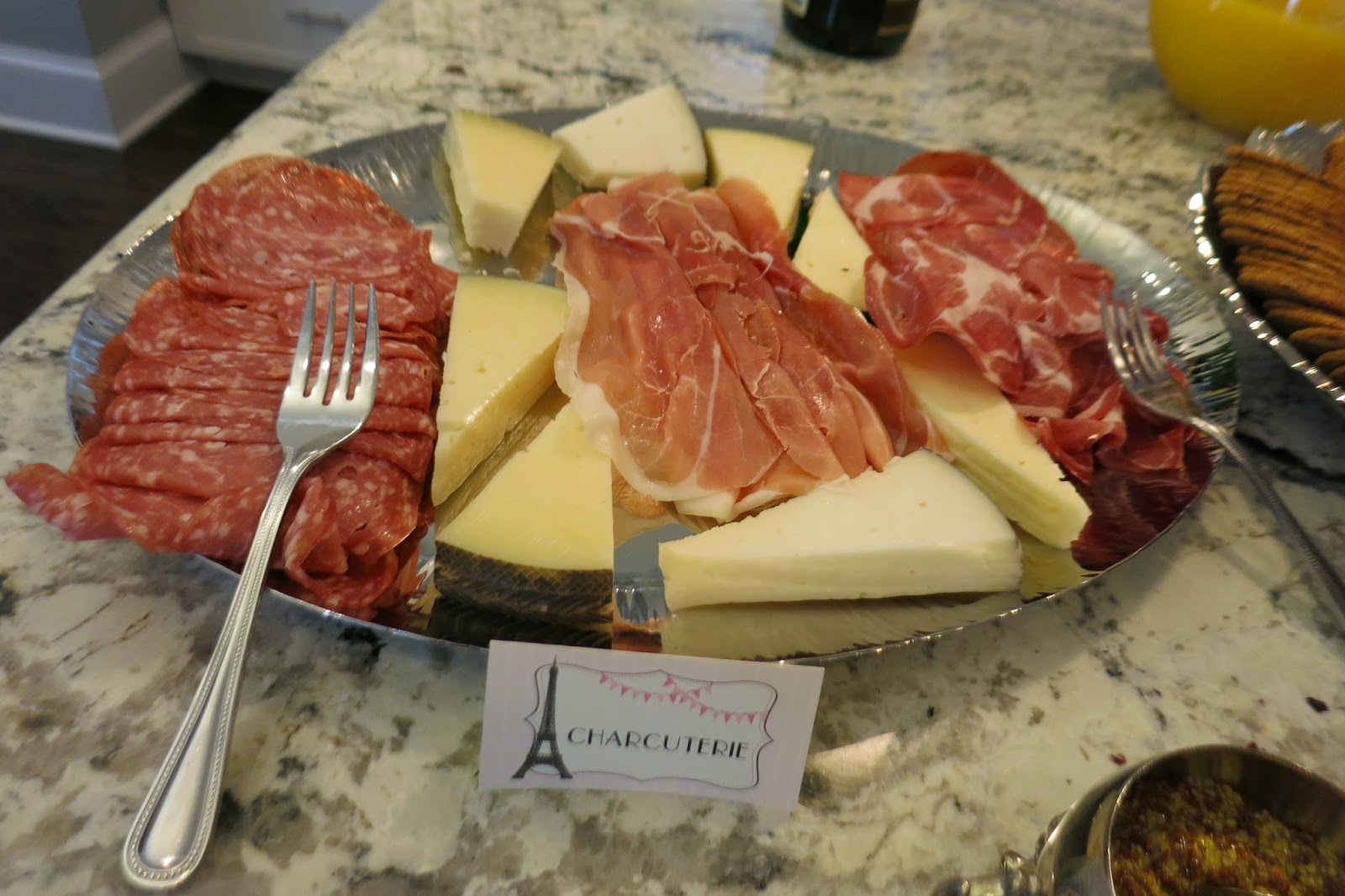 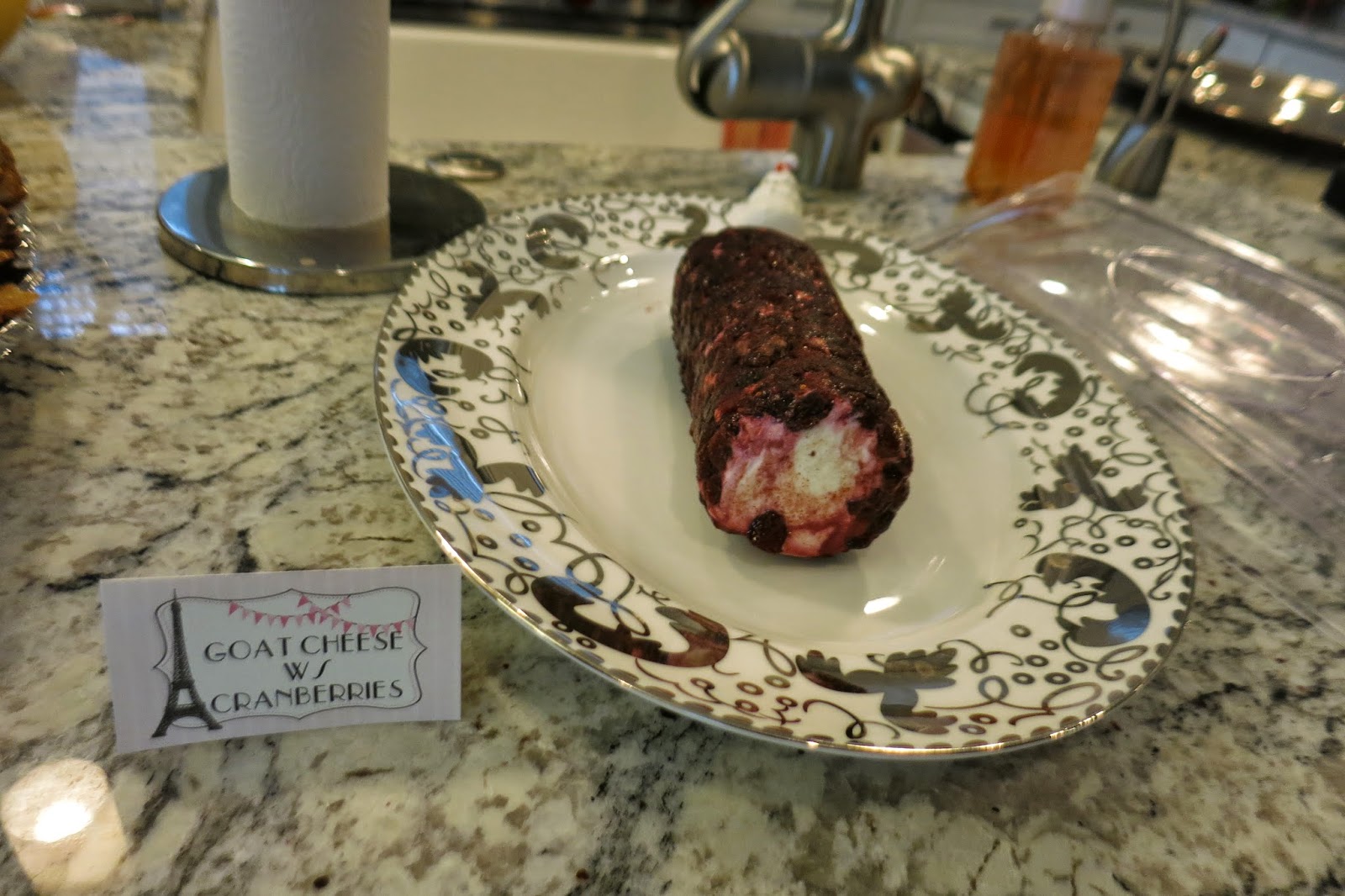 In addition to this, I also made “cheat” Croque Monseur (purchased croissants, bulk ham and Gruyere cheese from Costco, piled ham in a croissant, sprinkled cheese over the top and melted in the oven) and served them with a fabulous Dijon mustard from Trader Joe’s. I put the mustard in my silver sugar bowl from my vintage tea set (that I purchased for a steal at Goodwill).

There were also two types of mini quiche in a warming tray with chicken, feta and tomato crostini as well (all purchased at Costco, heated in the oven and tossed in my triple warming tray. BAM!)

Now…the desserts are where the party was AT. I made Charlotte’s cake (and yes, it is called a Charlotte- that is the official term for the type of cake). 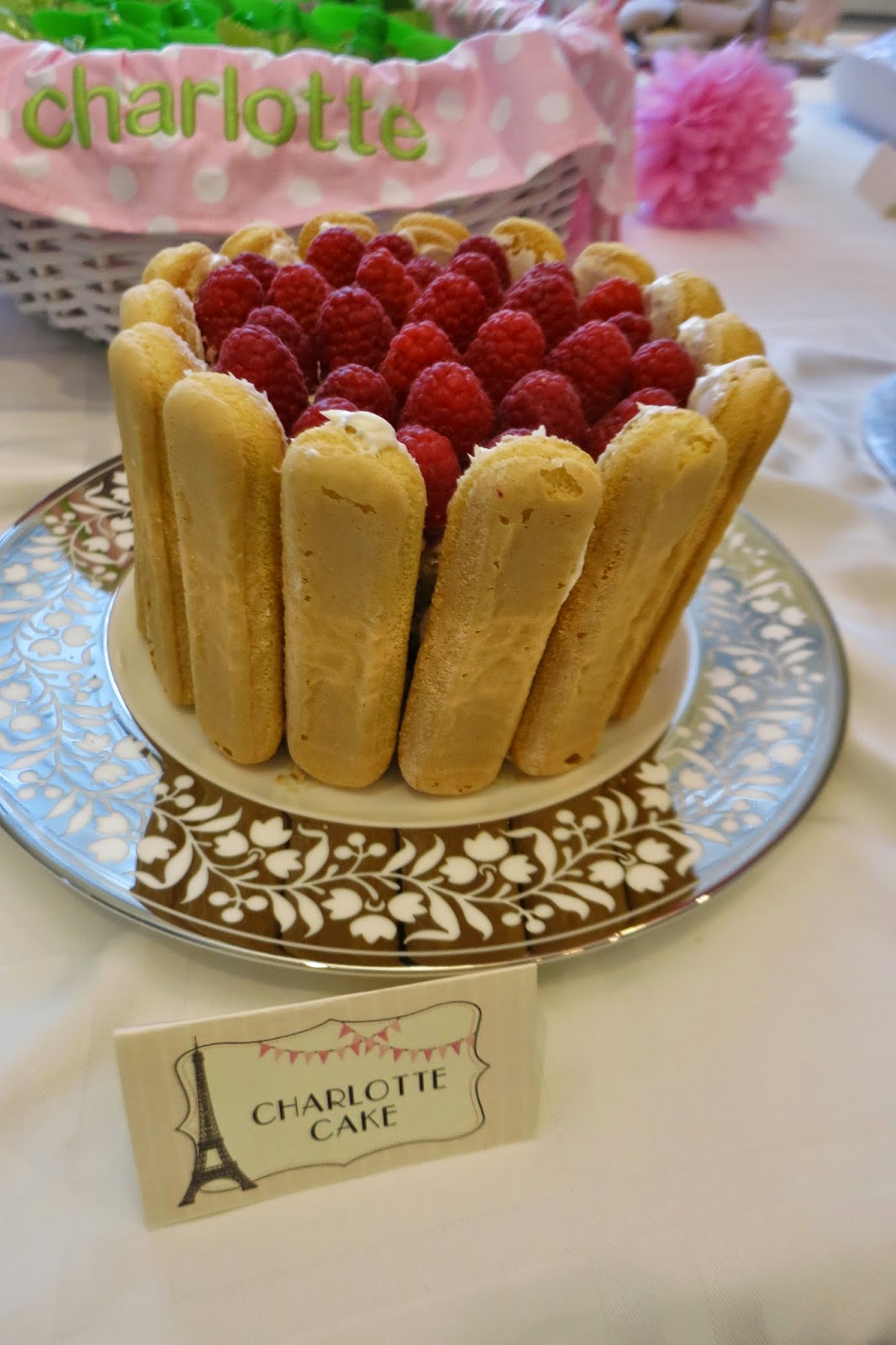 Looks hard, doesn’t it? Not so much. I made a vanilla sheet cake from a box mix, cut two same size circles, made butter cream frosting and stacked them, frosted the whole outside, added packaged ladyfingers around the outside and fresh raspberries on top. Voila! 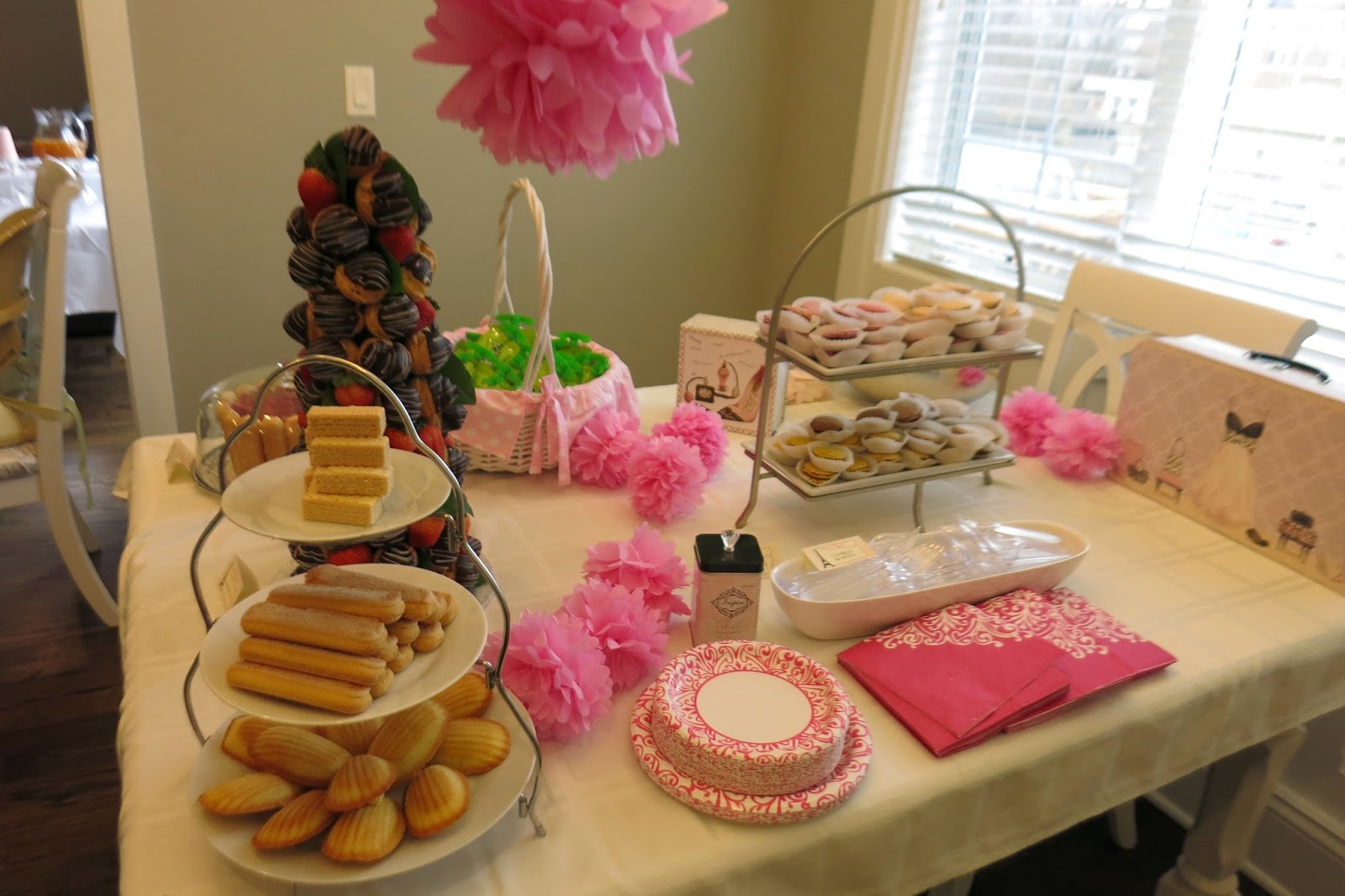 The croquembouche (massive tower of chocolate-dipped cream puffs and chocolate covered strawberries) was from Catering by Michaels, whom I highly recommend. I won a gift certificate there during an auction and was so thrilled that I was able to have this confectionery creation at Charlotte’s party! I had a French dessert tower with Madeleines, Lady Fingers and Wafer Sandwich Cookies. We also had a variety of pastel French macarons, which were absolutely to die for!! 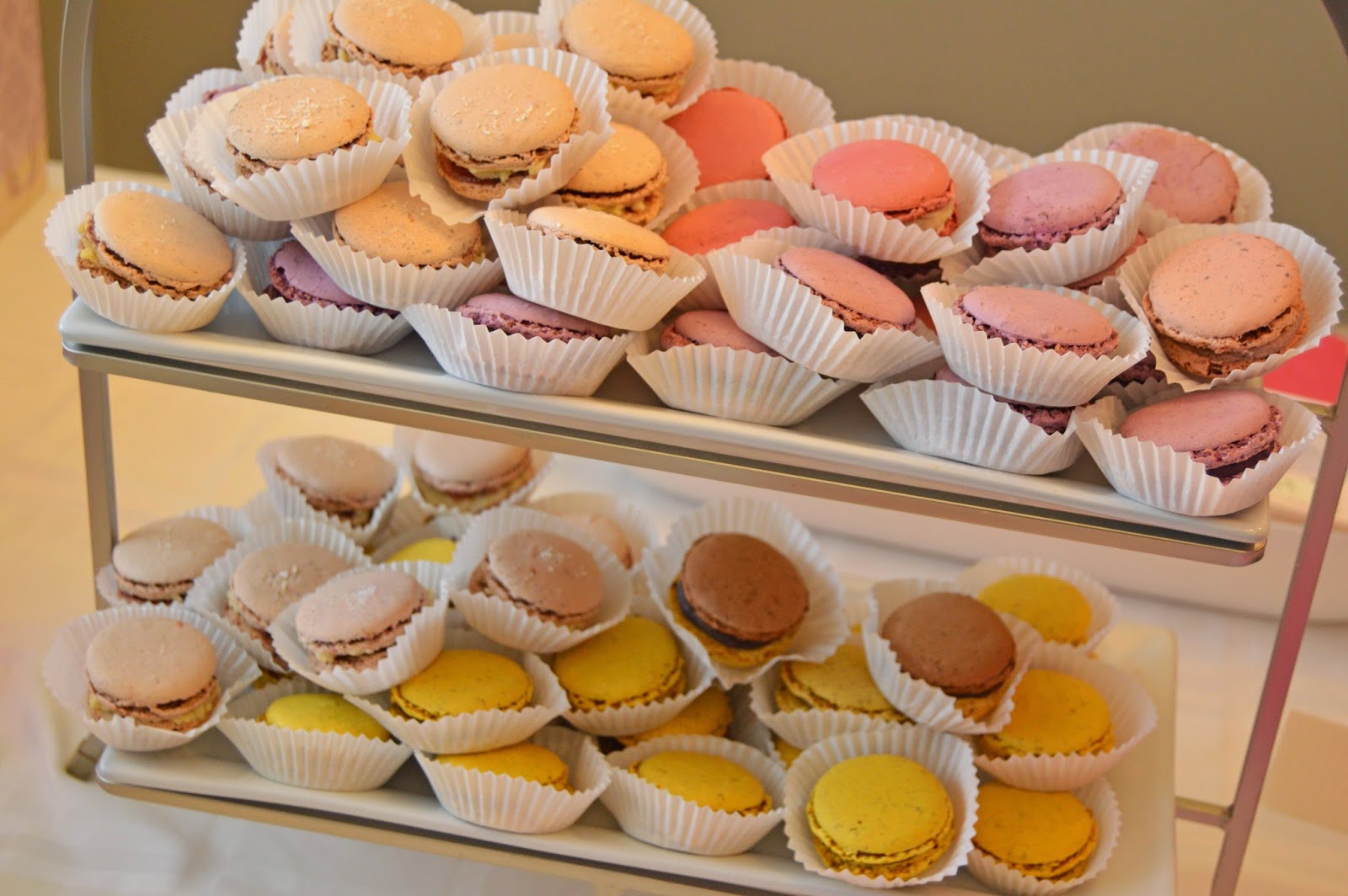 I also had a basket of GoGo Squeeze (that I displayed in Charlotte’s personalized Easter basket from Chasing Fireflies) for kids to grab. A dessert table vs. an official birthday cake for guests to eat worked well in this setting.

As for the cocktails…we had pink champagne, mimosas and bellinis, naturally. 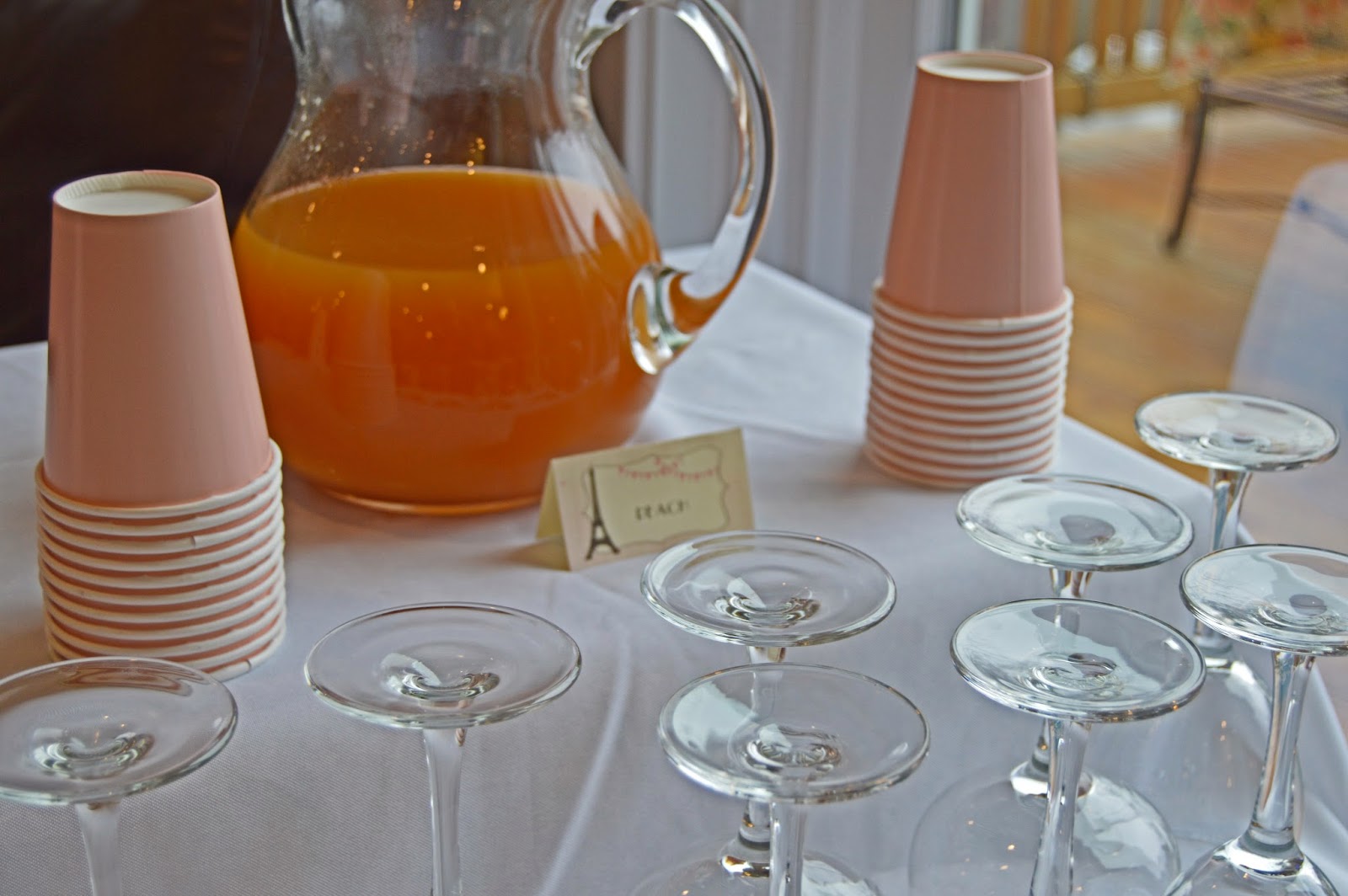 I took it easy on the decorations- I strung a few pink tissue paper pom-poms from the lighting fixture over the dessert table, scattered some mini pom-poms on the table, and added a few French-themed mini suitcases. 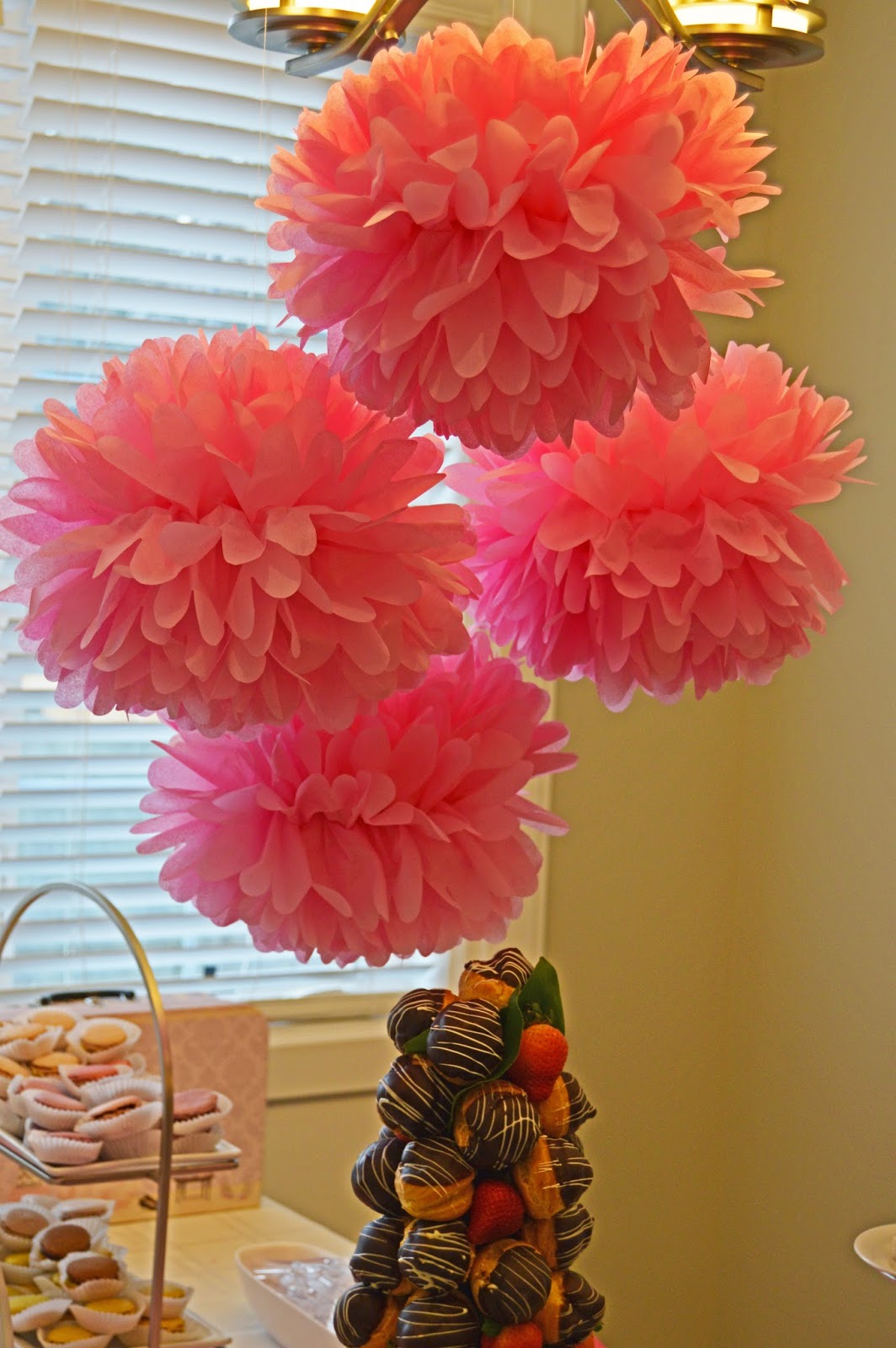 I also put a sign on the front door to announce the party- love to get everyone in tune with the theme before they even open the door. I simply printed out the white sign from the printable package, affixed it to hot pink tissue paper, and inserted it into this plastic frame from Ikea. 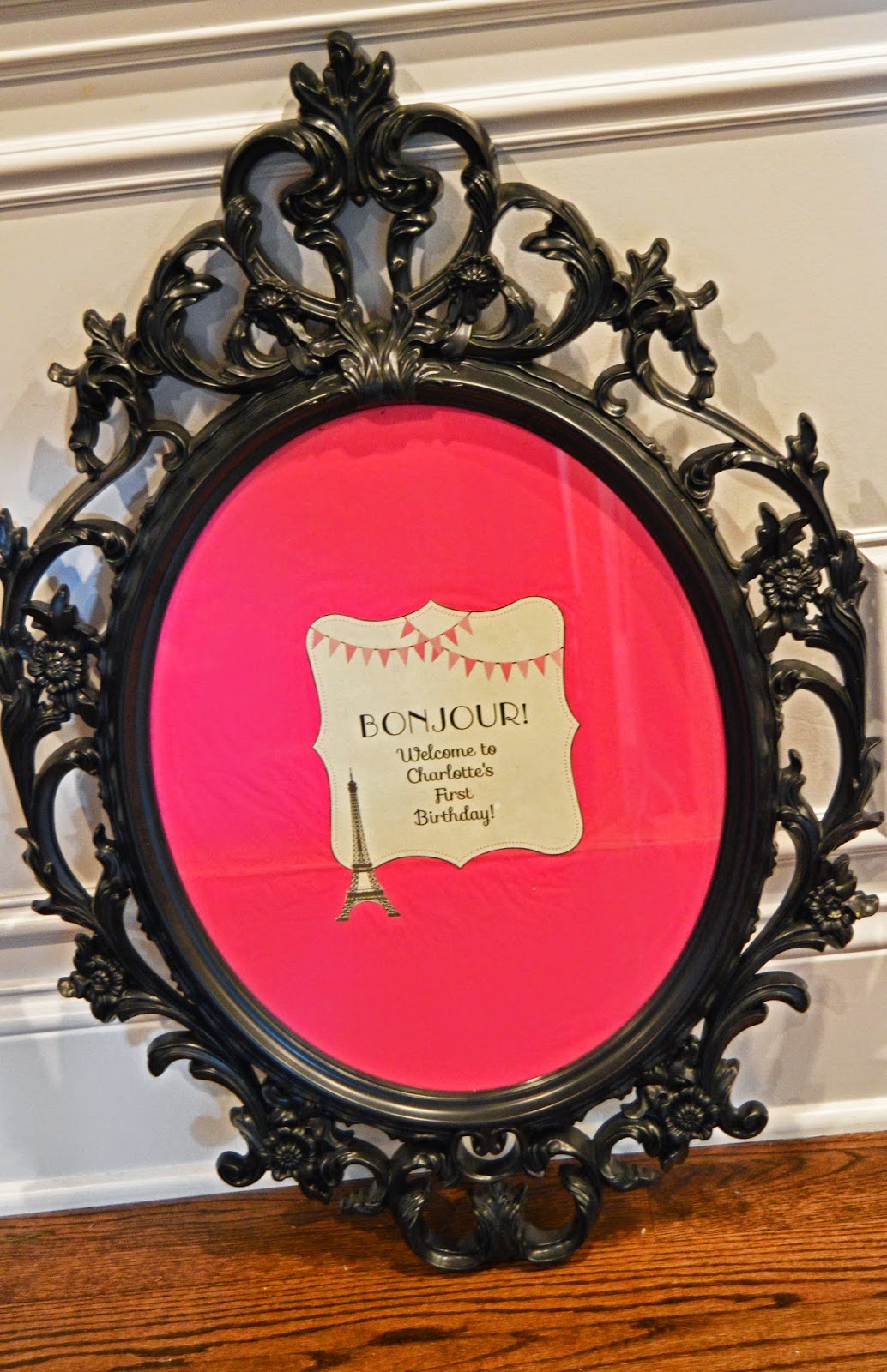 Plates, cups and napkins were all from the Dollar Store!

I outfitted Charlotte in an ombre lace romper with a coordinating hairpiece that I purchased from Think Pink Bows on Etsy (a must-visit site for moms- extremely reasonable prices, and good quality), paired with a cropped pink shrug (it was December, after all!). 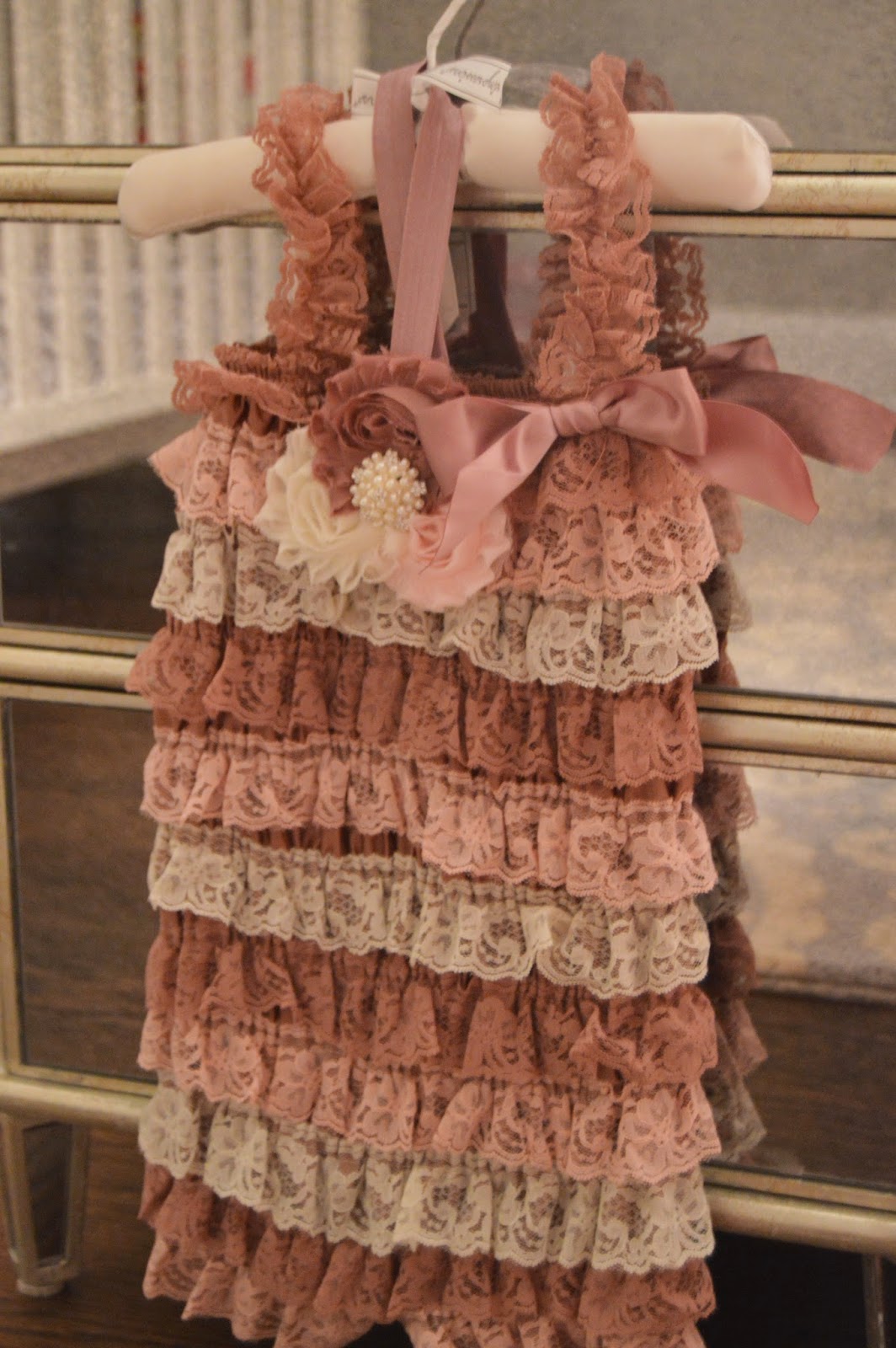 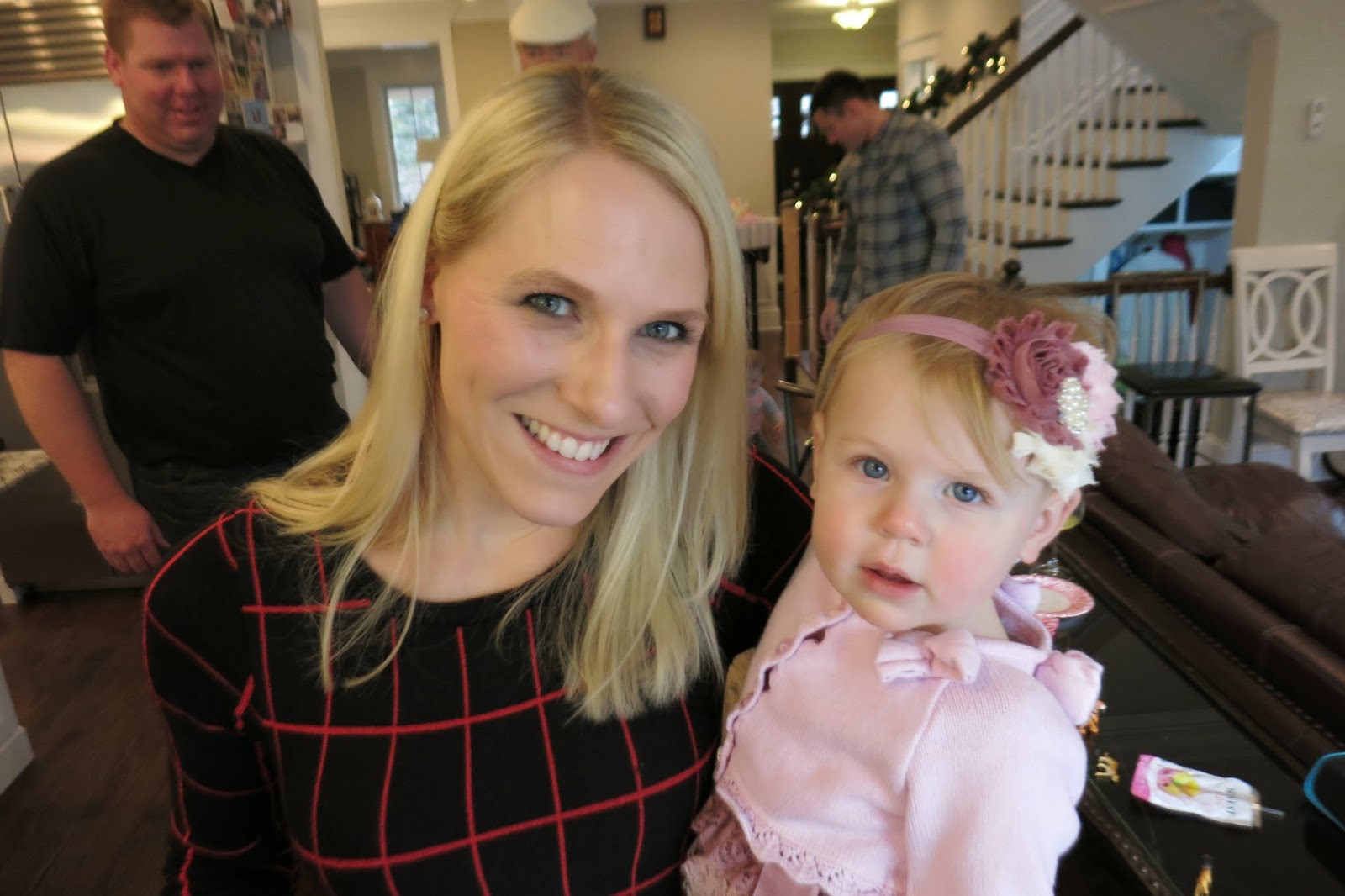 In the winter, it is tough to throw a party when everyone is packed inside, but I am pleased with how this one turned out! I think she was pretty happy as well! 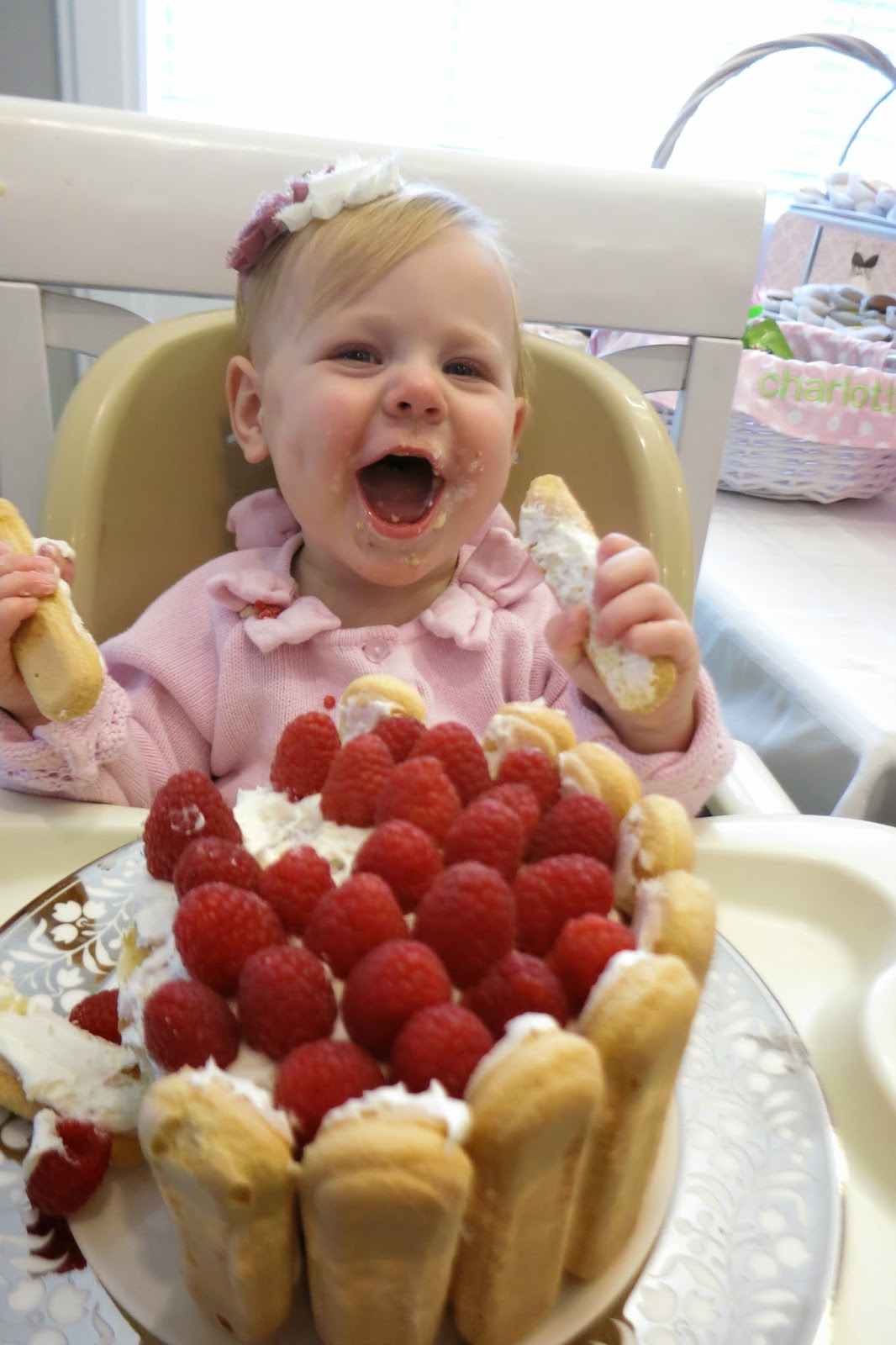