I have learned that as a parent, you need a laugh in order to stay sane…so here are a few laughs for you at my expense.

Fashion mistakes. We have all had them- the ridiculous animal print pants that we thought were SO fabulous (and maybe yours were…mine were a particularly nasty plastic snake print), the bad haircut, or the unbelievably high heels that we had to have but found out were impossible to actually walk in. I am going to highlight my favorite fashion mistakes through the years; feel free to laugh your ass off at my expense, but just know that I know you have been there too.

6th grade. Mr. O’Connor’s Spanish class. The Monday after Christmas, which you know means everyone wears their favorite outfit they received over the holidays. I was 11 and had recently come from an inner city elementary school where no one cared what you wore, and fashion wasn’t even a concept aside from stirrup pants and LA Gear high tops with mismatched laces. I got a fleece for Christmas; I was on the cutting edge of cold weather technology at the time so I don’t fault myself too much for what happened. I wore my brand new fleece to school, parked my rear in my seat and smiled at the classmates around me, waiting for compliments to fly. Class started, and just as Mr. O’Connor was about to start class, he spied me in my oh-so-trendy fleece. I thought it was a look of appreciation for my fashion-forwardness, but he said “Um, Miss Hanson, please take off your jacket so we can begin class.” What!?! Didn’t he understand that this wasn’t a jacket, it was a fleece?! I told him as much, but was greeted by giggles from my fellow students. “Miss Hanson, please take off your coat. I am not going to ask you again!” I slowly rose out of my seat, approached him, and let him know that it wasn’t possible. You see, I didn’t realize that a fleece was a COAT, meant to be worn with something UNDER it. Seriously. I was naked up top except for the fleece. Everyone figured out what had happened, and it took a while to live that one down.

I love accessories, I love to match, I love to combine different clothes and find joy in putting together new outfits from existing pieces in my closet. 7th grade I went too far with my obsession with Yin Yangs. Here it is, from head to toe: black & white headband, Yin Yang earrings, Yin Yang choker, Yin Yang sweatshirt, Yin Yang keychain on my backpack decorated with Yin Yangs, white jeans or black stretch pants, black and white socks, white shoes with black laces. Take that, accessory police! 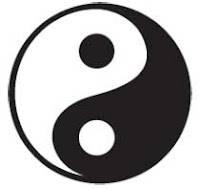 #5 Work It
Apparently, Middle School is a time for trying to figure out who you are. Wearing your sibling’s work shirt from their crappy minimum wage job became all the rage with the guys. Me, wanting to always be one of the guys, decided to hop on the trend wagon and wear my sister’s shirt from her crappy minimum wage job…at Chuck E. Cheese. I didn’t get the irony that a shirt from a mechanic with someone else’s name stitched into it was cool, but a multi-colored, checkered polo from Chuck E. Cheese wasn’t. FAIL. #4 Back in Black
Thankfully we have moved into high school and out of that awkward phase…kind of. In the spirit of James Dean or Ally Sheedy a la Breakfast Club, I bought into the loner/misunderstook biker look. Black, black black…leather boots boots, black booty pants and (p)leather jacket (couldn’t afford the real thing until my recent shopping spree). I personally loved this look, but it was way before my time. 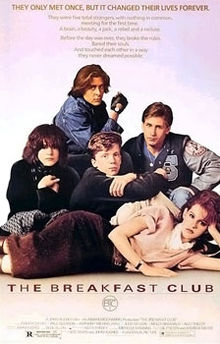 #3 1999
Prom. 1999. Decided to go out with a bang and dress up like a disco ball. Literally. My dress had more sequins than all the performers at The Baton Club put together, complete with sparkly glitter butterfly clips and silver glitter stripper heels. ROCKED it. Actually, I wouldn’t have changed that ensemble for anything!

#2 Hair!
The Awning. I think my brother-in-law coined that term, and it describes the bangin’ hair I was rocking up until…the Disaster occurred. Let me describe the bangs first…originally, they were curled, feathered and sprayed with Aquanet until no movement could be detected. I then decided that the feathered and fluffed look was out, and the barrel roll was in. That’s right- just one curl, straight across the forehead, just like my big sis. I decided during my freshman year of college after breaking up with my high school boyfriend that I wanted to reinvent myself and chop it all off. Not my best hair moment.

#1 Leather and Lace
Ah college…where sorority girls can dress like North & Ashland regulars to hide their insecurities (at least that is what I did, cheers to anyone else who did it for different reasons). Junior year- clearance rack surfing. Scored black pleather pants for $10 and wore them to a fraternity party that weekend. 2 things glaringly wrong here- pleather and clearance rack. After dancing in a sweltering hot basement for hours on end that fateful evening, two things happened. First, the zipper broke right in the middle of my bump n’ grind. Second, when I went to the bathroom to get the pants off in order to fix the zipper, they stuck to me and I literally couldn’t get them off. I had to go home and dig out the scissors. Ended my night early for sure.