I have a definite sweet tooth. I frequently make desserts in my home (because I zone out when I bake, and zoning out is a favorite pastime), but I have a 24 hour rule on sugary delicacies in my kitchen. After 24 hours, I shove them in my husband’s car and hi-ho, hi-ho, off to work they go. I didn’t think I would find a dessert that became an exception to my rule, but alas, miracles do occur (and aren’t rules made to be broken?) 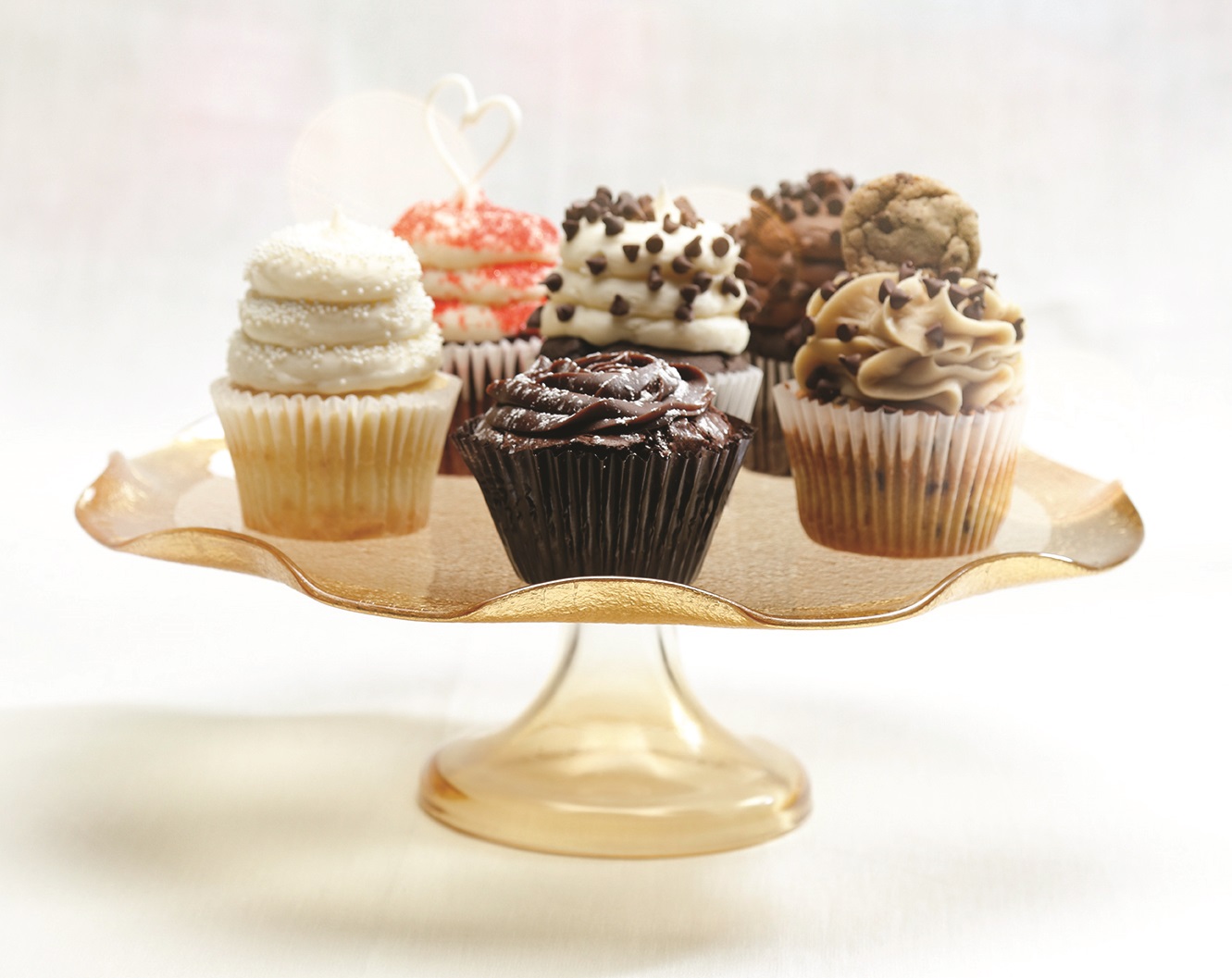 I recently attended the Grand Opening of GiGi’s Cupcakes RIGHT in my home town of Wilmette! I hadn’t heard of GiGi’s previously, and thought it might be a cute mom & pop cupcake shop because my kids call my mom GiGi. Little did I know that GiGi’s Cupcakes is the largest cupcake franchise in the US with over 100 locations, and this is the first in Illinois. The gorgeous GiGi herself was there, and the story behind this franchise is just as sweet as her fabulous mouth-watering creations. 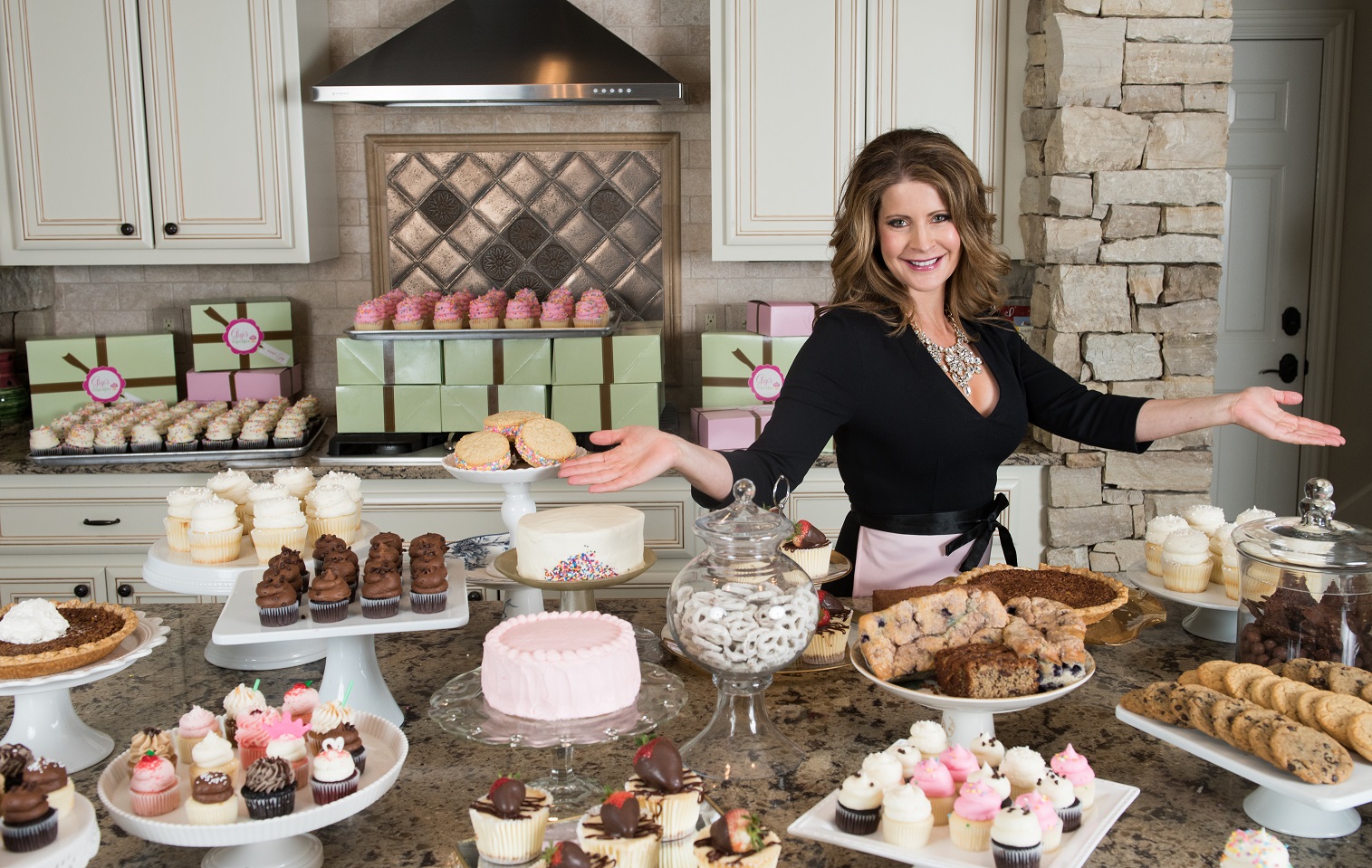 GiGi Butler has always had a love for baking- her aunts and great aunts owned and operated bakeries, so it was quite honestly in her blood. For GiGi though, her true dream was to become a country music singer so she headed to Nashville with just a few Benjamins in her pocket and gave it a shot. During the day she operated a cleaning business and hit up the honky tonks at night. After a while, she realized that a career in the music biz wasn’t in the cards. She decided to take her brother’s compliment to heart (he said her cupcakes were better than a popular chain in NYC) and off she went!

GiGi’s first bakery opened in 2008 in Nashville, and the recipes have come from her grandmother, great aunts, mother and other relatives. She created the “signature swirl” that is used on many of her fresh baked (daily!) cupcakes. Here I am with GiGi helping me attempt to re-create the decadent mountain of melt in your mouth frosting and I failed miserably! 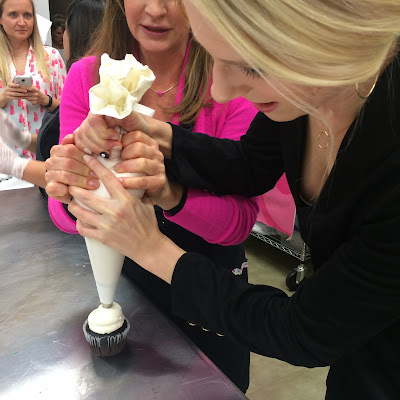 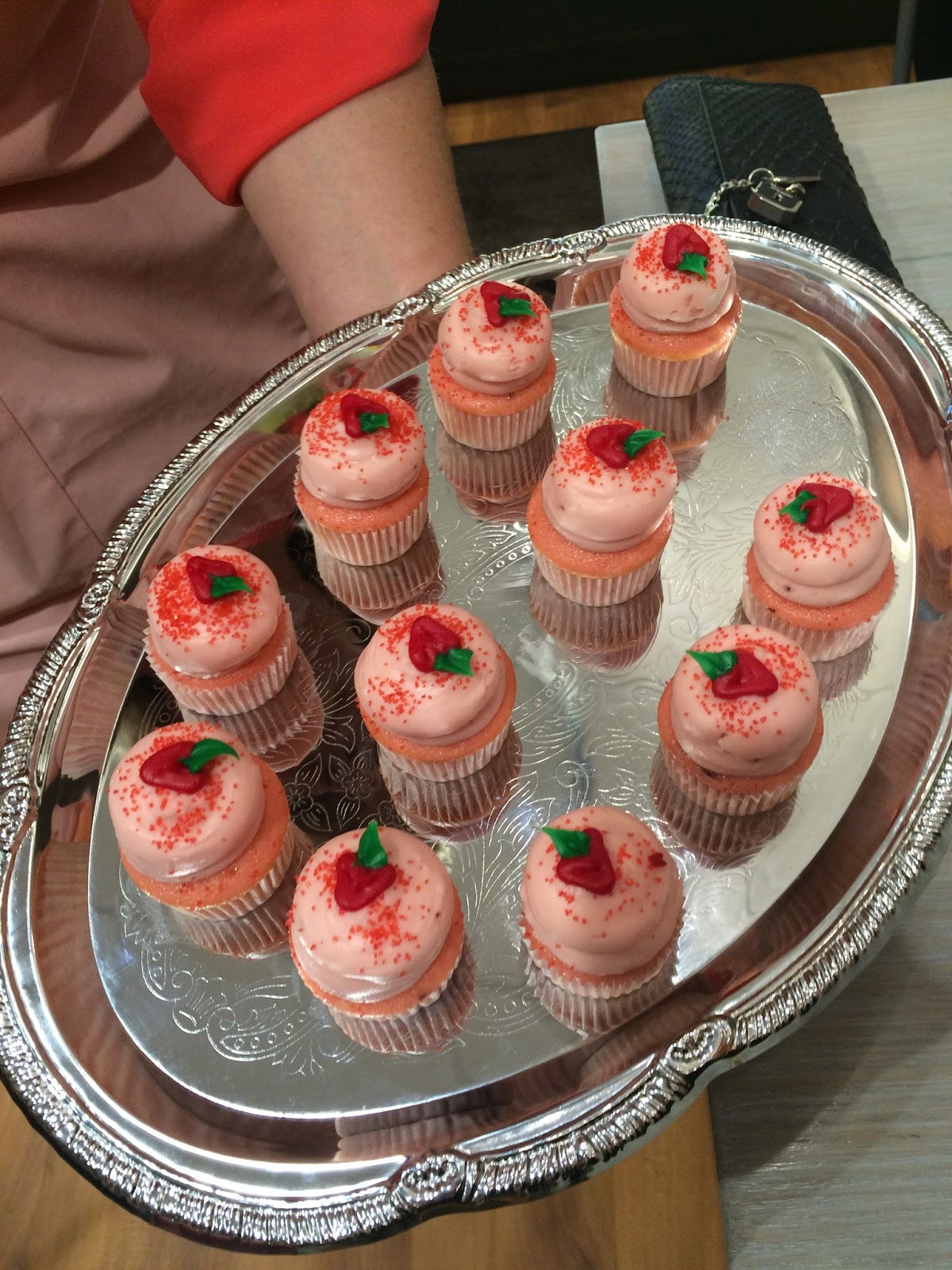 I won’t embarrass myself by telling you just how many cupcakes I sampled that night, but I um…ate my way through the majority of the flavors. My friend Meredith tapped out after a few, choosing to bring them home to savor, but my massive sugar tooth was in heaven. 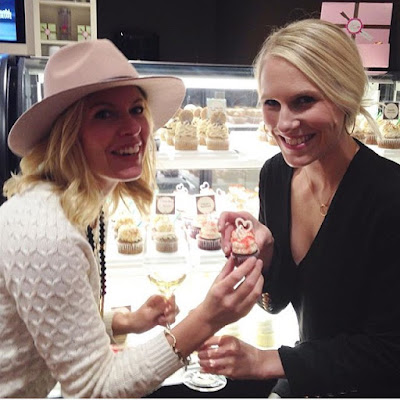 One cupcake that was just as cute as it was tasty was the Pumpkin Spice Latte. This delish pumpkin cake is topped with a vanilla bean frosting, sprinkled with pumpkin pie spice, crystal sugar and drizzled with caramel. Oh, and of course a mini green straw for garnish! 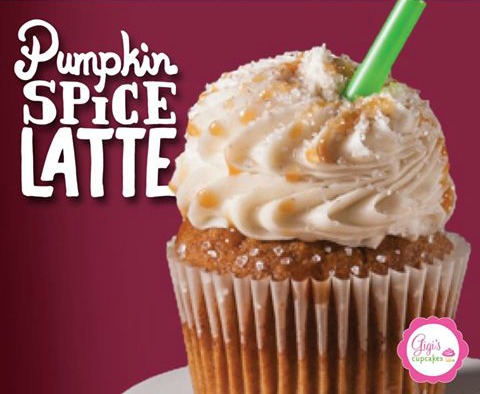 Lucky us, GiGi was kind enough to share the recipe! Here it is, the perfect dessert to wow your fam at this year’s holiday gathering. Or…bake them for yourself, stay in on a Friday night and eat the with a few glasses of bubbly while watching chic flicks. Not that I have ever done that or anything. Just a random idea. 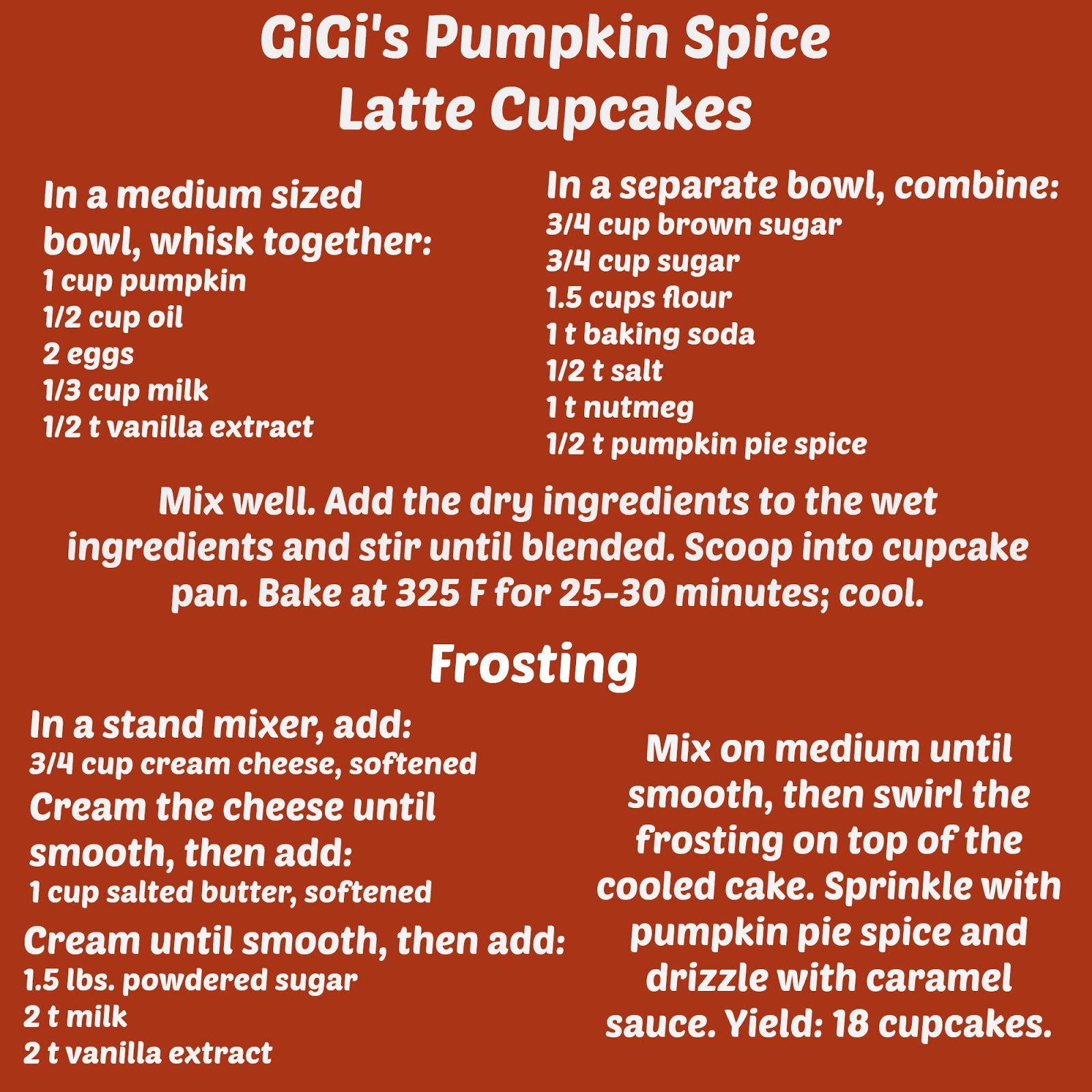 Enjoy!! Oh, and if you have a GiGi’s near you, they are having a 20% off sale on all orders placed online through Sunday, December 6th using the code JOY2015. You can select a pick up date later in December, so why not grab their Jingle Box- 12 mini cupcakes decorated especially for the holidays- for a festive party treat! 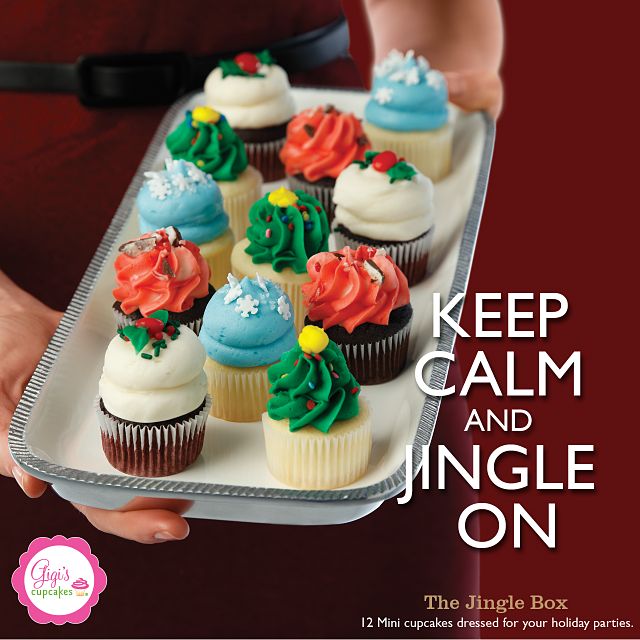 Charlotte and I can’t wait to go back 🙂 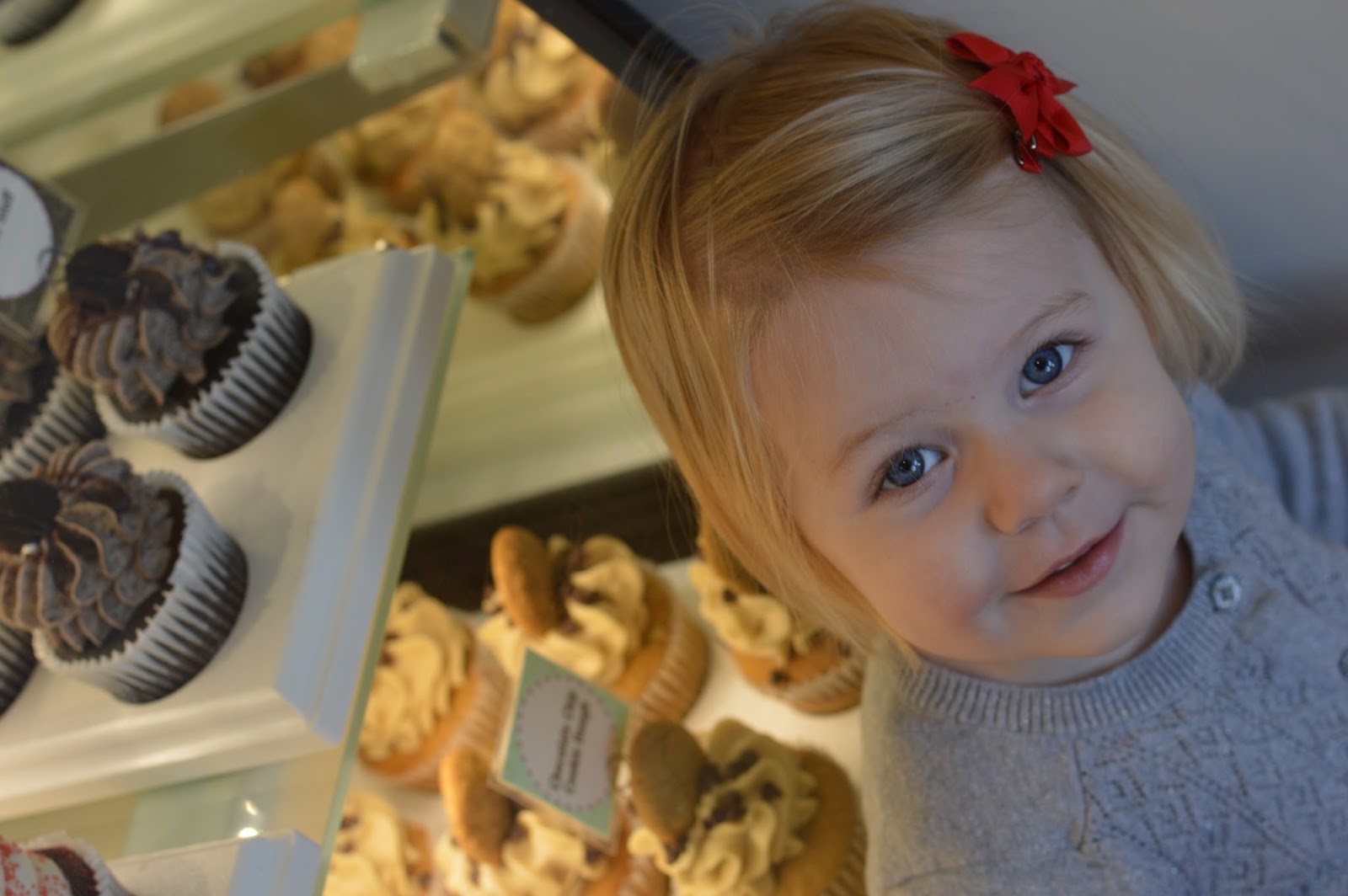