Have you ever wondered what happens behind stage during a theatrical production? Is it a mad rush to change costumes, remember lines and find props? Is the lead actor sleeping with an understudy? Is someone hitting the sauce, hitting on someone or just getting saucy? Noises Off, the newest offering from Windy City Playhouse, is a play within a play based upon this very concept. If you are looking for a side-splitting, hilarious date night, Noises Off won’t disappoint. 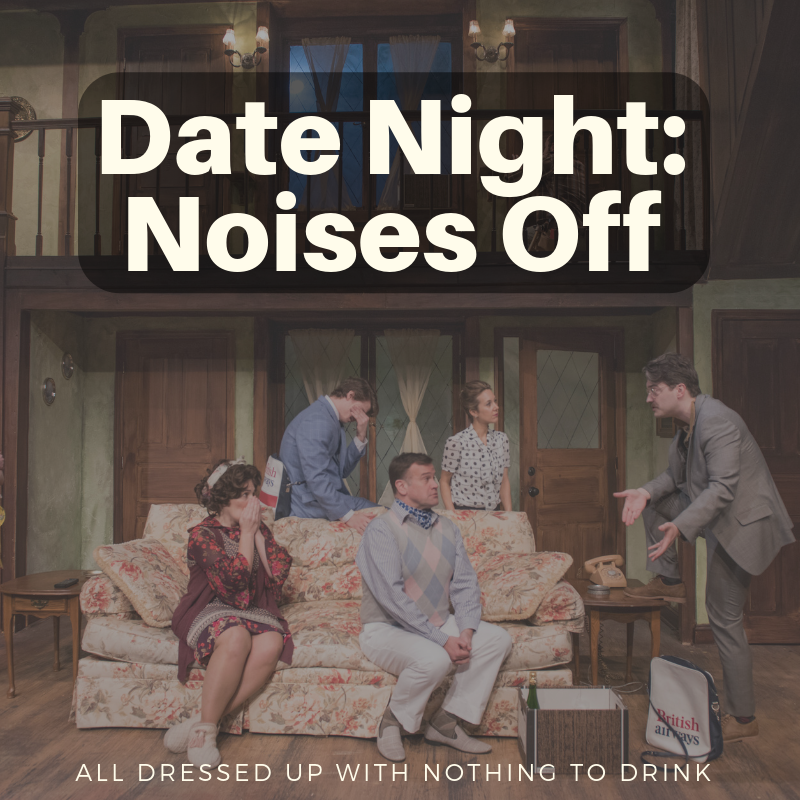 Noises Off is revival of the 1982 play whose inspiration came from the idea that behind the scenes could quite actually be more entertaining than the scene itself. The play opens with actors rehearsing for the opening night of “Nothing On,” a play which revolves around sexcapades, slapstick and subterfuge. The actors comically bungle props and lines while the director (Lloyd, who is also sleeping with two cast members) tries to unsuccessfully tame his tempter and practice patience with the motley crew involved in the production. 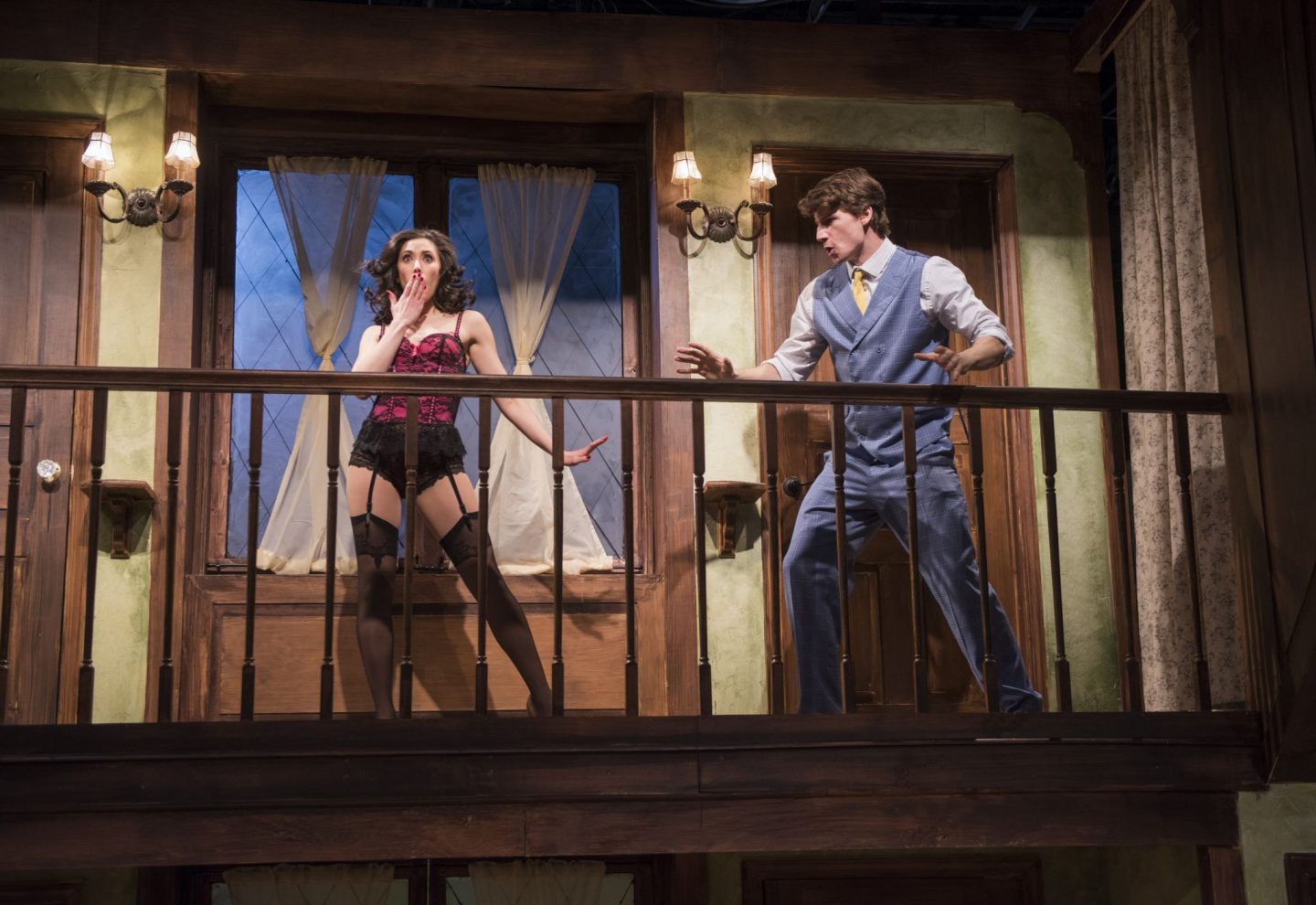 Act 1 involves the audience viewing the dress rehearsal from traditional theater seats. The first act is indeed a slow build as you get to know the plot and become familiar with how the actors interact. It can be downright silly during this stage, so just keep in mind that the ostentatious nature of certain characters as well as the clumsy prop handling becomes comical as the pace picks up.

Act 2 is where the real magic occurs. Audience members are invited to physically relocate to behind the stage, getting a behind-the-scenes view of “opening night” of the play. As relationships are revealed, secrets spilled and jealousy mounts, the cast tries to tame their own personal issues while still performing for the “audience” out front. The sheer physicality of this act is in itself an incredible source of comedic entertainment. 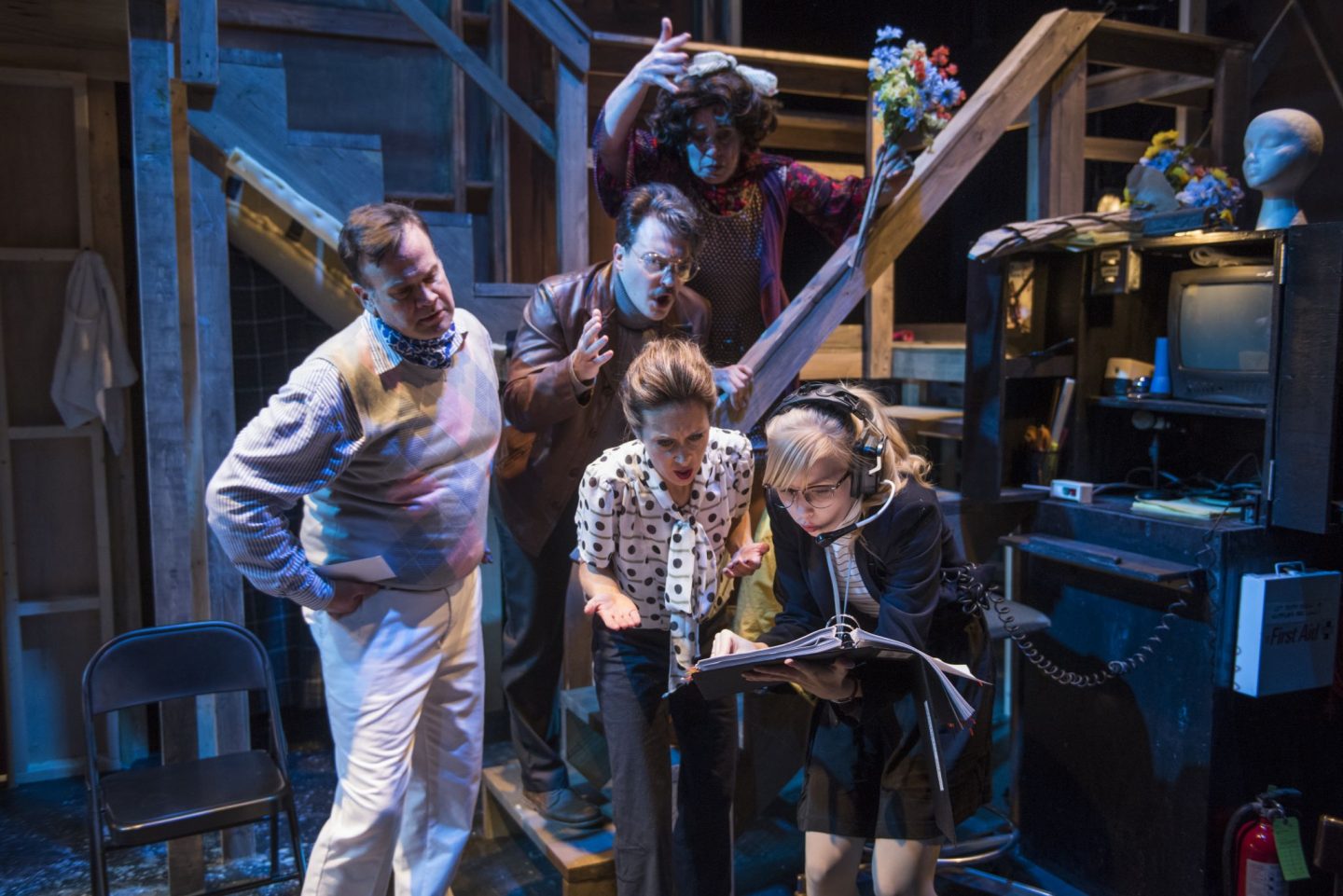 During Act 3, you are back in your original seats, experiencing the shambles that the play has become during its run. Actors quite frankly don’t give a damn about their lines, visual daggers are being given across the stage, and improvisation has reached dizzying heights.

Make sure to arrive early so you can cozy up to the bar and grab a show-themed cocktail. I sipped on an absolutely delectible drink called “Irish Sheets”- Bailey’s, Vodka, Chocolate, Coffee and a sprinkle of cinnamon. They also had “Where is Seldon?” (referring to the character that is constantly monitored for falling off the wagon) and “Some Kind of Sex Maniac,” which I will let you discover more about when you watch the play. PS- the main bartender is one of my favorites in Chicago. He is ON it- he remembered me from the last show I attended and makes a perfect cocktail every time. 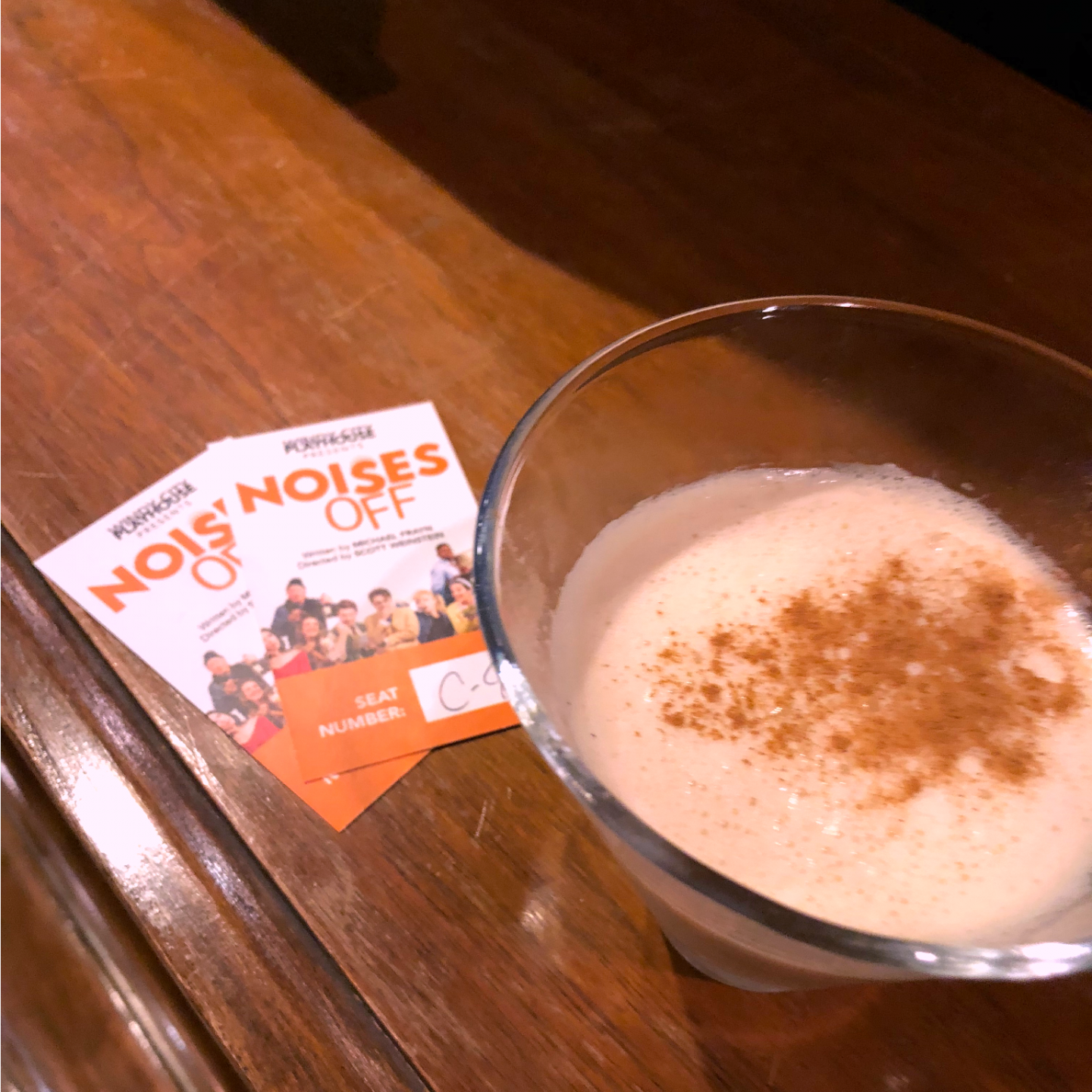 Ticket price: Grab tickets here; Prices start at $45 and up depending upon the day of week and seating type

If you are interested in dining in the area, there are a few restaurants that come highly recommend. I am a massive fan of those off the beaten path where they serve high-quality food without pretension. We dined at Smoque, which I have been craving since I read about it in Chicago Magazine’s 50 Best Restaurants in Chicago. They serve St. Louis-style ribs with sides from scratch in a counter service, no frills, BYOB atmosphere. The focus is on the FOOD, which did not disappoint. 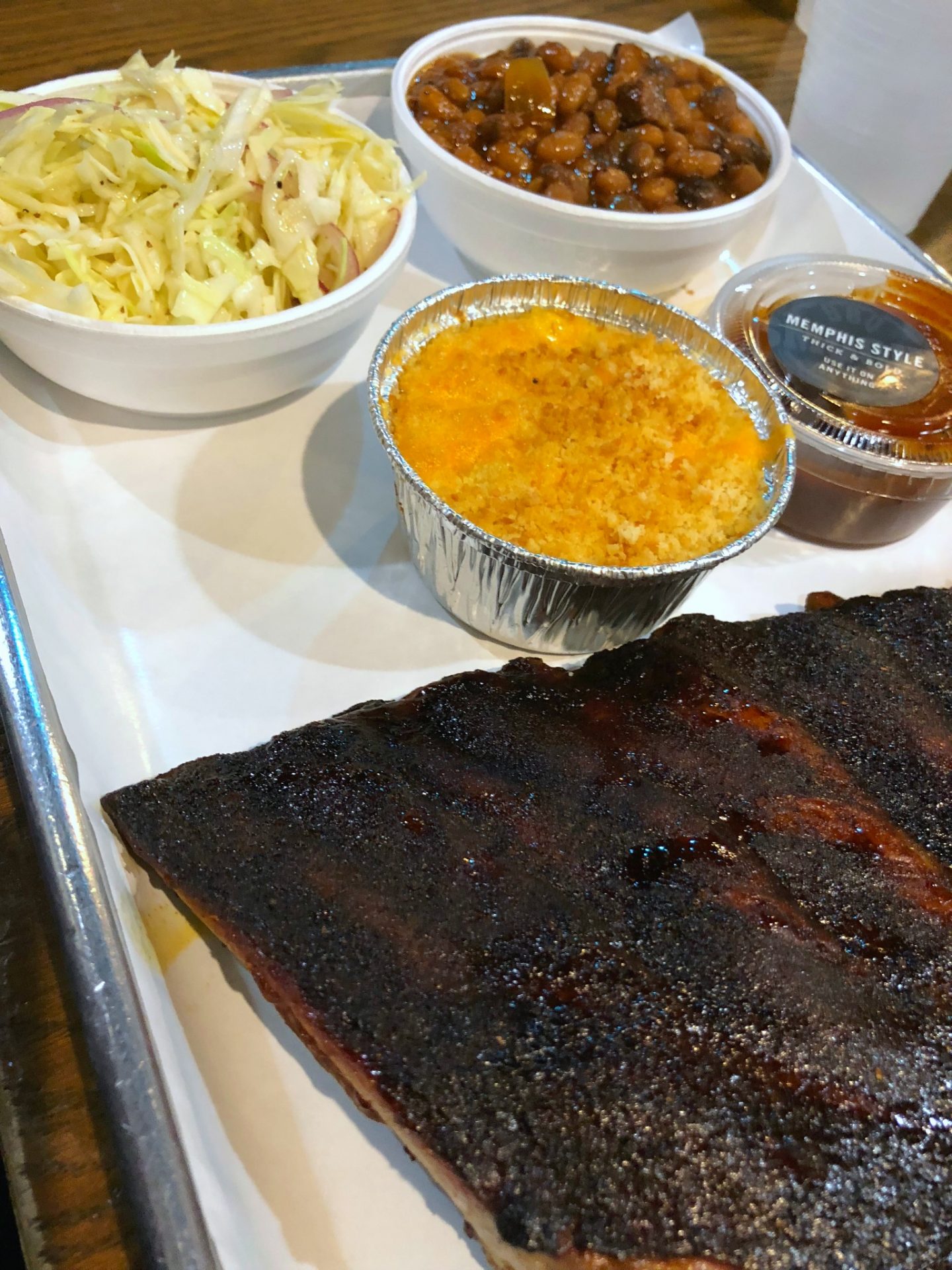 My incredibly talented and knowledgeable friend Keely of Lollygag Blog and fellow Chicago Parent writer lives in the neighborhood and had a couple of other recommendations. She loves Ixacateco Grill, whose chef/owner Anselmo Ramirez worked under Rick Bayless. They serve Southern Mexican cuisine authentically prepared with a sophisticated flair. Word on the street is that his mom makes the tortillas by hand in the kitchen.

Another spot that Keely suggested is Angelo’s Wine Bar whose wine list includes 101 bottles priced between $30 and $90. They also have incredible specials, so make sure to book your reservation and arrive hungry!

Cheers to a fun, funny and fabulous night out with excellence in comedic theater and unpretentious yet incredibly delicious food!

Disclosure- I received complimentary tickets to Noises Off for review purposes; all opinions are honest and my own.